Who is the person in the photograph, and what are they doing? Often there are clues in the photo which will help us answer these questions, if we know where to look.  The first thing the family historian needs to do is establish when the photograph was taken; even an approximate date can help us work out who the sitter is.

The first clue is the format. Many were only used for a decade or so, making dating easy. “Daguerreotypes” were sold from 1841 to around 1855, “cased collodion positives” retailed from the 1850s until the 1880s. The “ferrotype” became popular in Britain from the early 1870s. The postcard format did not appear until the early 20th century.

It’s the card-mounted formats, the carte de visite and the “cabinet”, that cause problems. These dominated the market from the 1860s to the first world war. Happily there are all sorts of clues to the date of the image connected with the appearance of the cardboard mount, its style of decoration and the advertising it carries, especially the photographer’s name and address. By consulting records of when photographers were working (see resources information, below) this information will often help us date the picture. 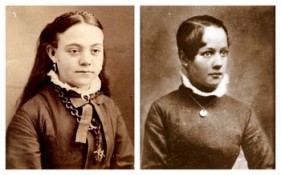 In addition, we have the information contained within the image itself, particularly female fashion details. This means that most photographs can be assigned a date within around five years of their production.

Once we have a date, we need to ask why the portrait was taken. What activity or event does this photograph record? Our ancestors courted the camera to celebrate special occasions and those events which presented the individual in a good light. Career success, for example, was recorded through portraits of people wearing uniform or badges of office. The special occasions most commonly celebrated in portraits were rites of passage: christenings, comings of age, engagement, marriage and anniversaries. But it is not always easy for us today to identify the rites behind the picture. In some cases we have ceased to observe them altogether, as in the case of breeching, or we celebrate them in a very different way, as in the case of weddings.

Finally, anybody who has looked at a series of studio portraits will be struck by their uniformity. Our ancestors did not smile. They adopted stiff poses. They wore their best clothes and sat on stage sets. Once we can recognise these conventions, we can begin to pinpoint those features of a photograph that are distinctive. If an unusual prop or accessory appears, for example, it probably belonged to the sitter, and its appearance indicates that it has significance – study it, and it could help identify the sitter.

Armed with a date and an event, and perhaps some other significant information, you can now turn to parish registers, census returns and trade directories to see if you can match these findings with a likely candidate among your ancestors.

To continue to read this article at the theguardian.com click here.

Visit our resources section in the main menu to get useful advice and handy downloads to chart and organised you family’s history.

Great book. I gave my copy to my sister-in-law, so am trying to track down another copy for myself. The book gave me much encouragement and ideas when I had been unable to make further progress. Many thanks